When I was researching into the Durrell in Russia series I came across a fascinating set of photos on Flickr of Durrell and Lee during their trip to the former USSR.

The photographer, Byron Patchett, very kindly agreed to let me post some here to share with you (thanks again!). Also, you can have a look through the complete set of pictures on his Flickr stream and Google Plus stream – it’s well worth popping over there for a visit not just for the pictures of Durrell but also if you (like me) are in any way interested in photos of the former USSR.

Some of the photos are shots of Durrell and Lee and others are of places and animals in the various former Soviet republics the Durrells visited. If you click on a photo you will be taken to the original image in Flickr, where you can see it larger.

Please note that of course the copyright to all the photos belongs to the photographer!

Durrell in a Russian cafe

Durrell and Lee on a Volga river boat

Picnic (I think this is my favourite – look closely and you can see a bottle, possibly of vodka, by Durrell!) 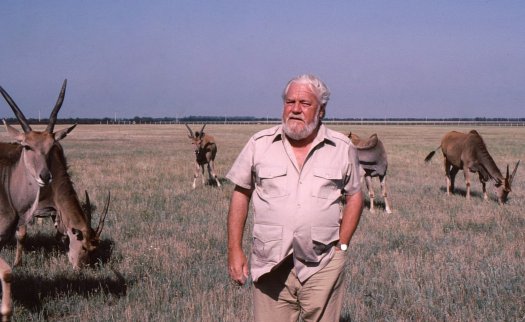 Durrell and the Eland

OK, so maybe this one is my favourite. When I visited rural parts of Western Ukraine on a research trip a few years ago, they still used horses and carts like this!