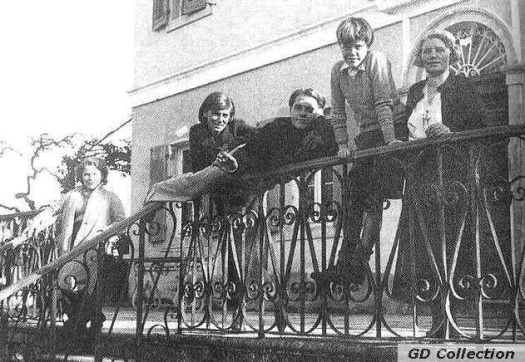 (Louisa Durrell, Nancy Myers Durrell (second from left) with Lawrence, Gerald and Margo on Corfu on the veranda of the 'Daffodil Yellow villa' near Kontoali, 1935)

Virago will publish a new biography of Nancy Isobel Myers Durrell, Lawrence Durrell’s first wife, next February, to coincide with the centenary of Lawrence Durrell’s birth. The biography, titled Amateurs in Eden, is written by Joanna Hodgkin, Nancy’s daughter by her second husband, Edward Hodgkin, whom Nancy met and married in Jerusalem in 1948. Hodgkin, who has written several novels under a different name, received a grant from the UK’s Arts Council to write the biography.

Lawrence and Nancy, an artist, married in London in January 1935, and a couple of months later, they left for Corfu, closely followed by the rest of Lawrence’s family.

When war broke out, the Durrell family left for England, but Lawrence and Nancy stayed behind. They escaped Corfu for Alexandria, Egypt in 1940. The marriage broke down, and the pair split up in 1942. In 1947, Lawrence remarried an Alexandrian woman, Eve (Yvette) Cohen.

Remarkably little is known about Nancy, who must have been such an important figure in the lives of the Durrells on Corfu and presumably influenced Lawrence Durrell during the most important years of his development as a writer. Durrell does mention Nancy in his travel memoir about Corfu, Prospero’s Cell. Henry Miller, who visited the Durrells on Corfu in 1939, makes several mentions of Nancy in The Colossus of Maroussi, his record of that trip.

Who was Nancy? Anais Nin described her as a woman of silences, “I think often of Nancy’s most eloquent silences, Nancy talking with her fingers, her hair, her cheeks, a wonderful gift. Music again.'”

According to Lawrence’s sister Margaret Durrell, Nancy was a gentle and quiet woman loved by the family. In a conversation with Ian and Sue MacNiven, Margaret says of Nancy that “We used to stay with her and Larry in the White House at Kalami and we all loved her very much; she was very gentle, a lovely person.”1

Nancy, however, is omitted entirely from Gerald Durrell’s famous memoir of the family’s Corfu years, My Family and Other Animals. Perhaps this is for narrative simplicity, since much of the book’s humour comes from the interactions between “brother Larry”, whom Gerald portrays as living with the rest of the family for the duration of their sojourn on the island.

Hodgkin’s new biography of her mother purports to shed light onto Nancy’s life, including of course what happened to her after her split from Durrell, when she lived in Jerusalem.

1 Margaret mentions Nancy again in her own memoir, Whatever Happened to Margo?, written about her adventures as a landlady in the late 1940s; but it seems she confuses Nancy with Lawrence’s second wife, Eve Cohen. Margo refers to a risque painting that ‘Lawrence and Nancy left behind [in Margo’s house in Bournemouth], you know, the one Nancy did an embroidery from when she was here and expecting?’. Nancy’s only daughter with Lawrence was born in 1940 in Greece; the couple later split up in 1942, and did not visit the Durrells in England.